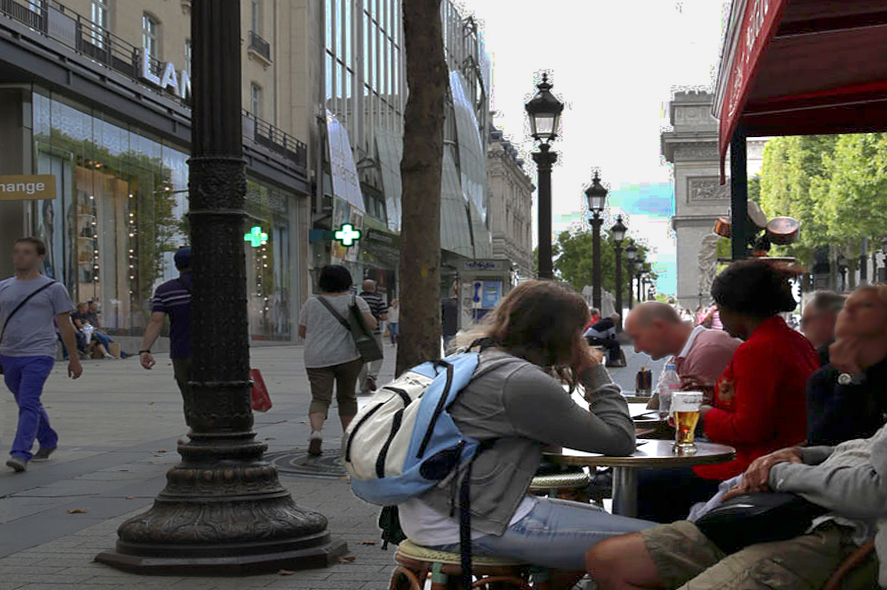 The liquid in the cup stared back at me, still trying to convince me that it *was* actually tea.  It continued to fail.

I closed my eyes for a moment, perilously close to tears of sheer frustration, then gave in and turned it to laughter at the absolute black comedy of the situation. Australians, like the British (or sometimes maybe more so..) tend to be believers in the adage that “a cup of tea will make it better” – I am no exception.

So, here I am in Paris, surrounded by amazing architecture, iconic monuments, iconic fashion brands and fabulous French food, brought almost to tears by… a cup of tea…..

It starts with the fact that there is no tea/coffee making facility in the hotel room – so my morning is a challenge to begin with.  But I have made myself overcome that and we have set out in late morning to walk from the hotel to the Eiffel Tower, as usual, compulsively taking photos as we go (look for another article, or maybe a picture book, on the doors of Paris…), have lunch in an art deco cafe (dating from 1927) and then to take a 1 hour guided boat cruise on the Seine, past a dense concentration of amazing historic buildings and bridges, then to walk from the river, up the Champs Elysee to the Arc de Triomphe, and then back to the hotel.

6 kilometres of walking, 4 hours and 261 photographs later we are two thirds of the way up the Champs Elysee and my body is telling me that I have not being doing enough walking lately, and that a rest is in order.  There ahead is a cafe / restaurant, of the same chain as the one near the hotel, at which we had eaten an excellent lunch yesterday.  We stop and I sink gratefully into a seat at the sidewalk table.  We peruse the drinks menu, and amongst the various coffees I spy the very welcome word “The”.

The waiter takes a ludicrously long time to ask for our order (that should have made me think twice…)  We order – a cup of tea (with sugar and milk specified) for me, a cup of coffee for him.   The waiter has little English, but ordering tea is not normally that difficult, and he appears to have correctly captured our request.

We wait…. and wait….. and wait…. I begin to wonder if they are off somewhere harvesting and drying the tea leaves.

Eventually he reappears with a tray and delivers what appears to be an acceptable coffee, and a cup, and fair sized teapot.  Issue one – no milk or sugar……

After some effort, I manage to capture his attention, and repeat the request for sugar, and milk.  After three distractions (he appears to be at the bottom of the pecking order of waiters, and is being run ragged at the direction of the others) he delivers the sugar.  I repeat the request for milk.  He looks at me, shocked, and says in halting English “Milk ?  for your tea ??” ‘Oui’, I reply.  He nods, still looking shocked, and scurries off.

At last, I think, I will get some tea.  Making the, apparently radical, assumption that it cannot take long to bring me a small jug of milk, I decide to pour the tea in anticipation.  I empty a sugar sachet into the cup, lift the pot and pour a little (to see how strong it is – perhaps I will need to wait a little, or stir it to get a good colour ?).

Horror strikes me, as I see completely clear water fall from the spout.  I open the lid of the pot, and peer in.  My first assessment was, indeed correct – there is absolutely nothing in that pot but water, and water that is no longer particularly hot either.  We spend 5 minutes (and the milk has still not appeared…) and finally attract the grudging attention of the senior waiter who appears to be the duty ‘floor manager’ (perhaps his English will be better, we dare to hope..).

Ah, he says and rushes off.

We wait… and wait…

After some minutes the original harried waiter reappears – carrying a milk jug!  But no teabag…  he deposits the milk jug and rushes off again.  I begin to truly despair – that delicious, soothing, “makes everything all right” cup of tea that I had imagined, needed, seems further away than ever.

After a further few minutes he reappears (ah, relief – perhaps I really will get a cup of tea?) with a box of different tea bags, and a short ‘conversation’ results in me having, in my hand, a tea bag which should produce something approximating ordinary black tea.  Determined to be hopeful, I deposit the teabag in the pot, and puddle it about a bit with the spoon to encourage rapid brewing, then pour some into the cup – there is an alarming lack of steam and I am starting to suspect that the horror is not over – I am becoming certain that, whilst the near impossible task of obtaining a tea bag, milk and sugar has been accomplished, the pot of water has lost all semblance of heat.

Refusing to acknowledge this suspicion, I stir the result, and reach for the milk jug to add the small amount of milk that I use – further horror ensues – the milk jug is warm! (warmer than the teapot by this stage…) They have heated the milk, as if it was for coffee (I hate the taste of cooked milk!).

But I sooooo badly want a cup of tea, I refuse to give up, I pour a little milk in, and raise the cup to my lips.  Surely it can’t taste that bad ??

But it can.  It is, without a doubt, the worst cup of tea that I have ever tasted in my life!  Not a very nice flavour or quality of tea in the tea bag in the first place, colder than lukewarm by now, wishy washy in taste as a result, made worse by the cooked milk flavour overwhelming the tea flavour.

I put the cup down, take a deep breath – surely it can’t be that bad, surely ?

This is where I resist the urge to cry, and instead dissolve into helpless, almost hysterical laughter.  I have always said, when asked why I drink tea, not coffee, that, whilst I don’t particularly like the taste of coffee, it is mainly that, while travelling, it is a lot harder for someone to completely mess up making a cup of tea, than a cup of coffee.  It would seem that I have been wrong about that all along – I had just never been exposed to the particular Parisian talent that was required to do so.

So, we pick up and, after it takes another 10 minutes to manage to pay for our ‘drinks’, head back to the hotel – where I discover, in an alcove down the hall, a hot drinks vending machine – and conclusively prove that it makes a better cup of tea than the cafe staff could ever manage!

(Note: – I actually thoroughly enjoyed Paris, it is an amazing and beautiful city, but this experience was just one of those things that needs to be recorded!)

Kim Lambert is a Travel Writer, Speaker, Photographer, Writing and Publishing Coach, and an eleven times Amazon Number One Bestselling Author, with more than 25 books published to date (as herself, and under pen names for her ﬁction). (ﬁnd her on Amazon at http://www.amazon.com/Kim-Lambert/e/B00I8KGK4Y/ ) She has just released the ﬁrst in a series of pictorial travel books -'Tasmanian Summer' - you can ﬁnd it on Amazon at www.amazon.com/dp/B01NCPY08D/ which became an Amazon number one category bestseller within 24 hours of release. She travels extensively (23 countries in the last 4 years, and more being added all the time) and writes about her travels, as well as taking high quality photos of everywhere she goes. Her articles have been published in a range of luxury travel publications, and she also has a n extensive number of articles published on business and writing/ publishing topics. Her next planned travel is a 5 week trip to the US, central America and the Caribbean, in March and April 2017. She is also the owner of a publishing company (http://www.dreamstonepublishing.com ) which designs, edits, formats and publishes books for a variety of authors She mentors business owners who wish to boost their authority by becoming authors, assisting them with creating books that produce the optimal results for their business. Kim is the creator of the Product Creation Launchpad course and the Zero to Book 3 day writing course.